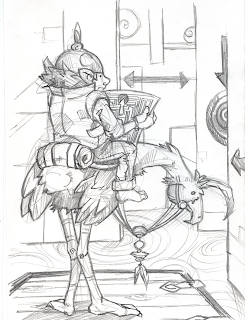 Here is the first return image on the little project I started. This was submitted by my friend Christopher. The words he chose: Door, Labyrinthine, and Aim.

As I was sketching this is the image that came to mind. It's likely this was influenced slightly by the movie Labyrinth starring David Bowie, though Mr. Bowie had little do with my inspiration. One of the creative artists for Henson's Labyrinth was Brian Froud. I would definetly say that his artwork has been influence on my style and taste towards illustrative art.

This second image is the first sketch I did of the piece. I liked the idea, but did not like the lack of depth in the image. So I attempt to a little more dimension to the piece in the final drawing above. 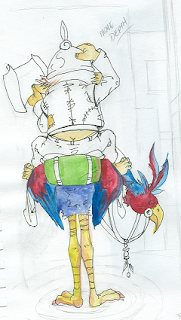 Thank you Christopher for the wonder ful suggestions!
I'm looking forward to more suggestions. I had a great time doing this one, and I do feel it will work to help me stay motivated to create.

love the final piece!! what are the chances of seeing it in person?

Whatser said you're an artist, and she wasn't kidding!

Now I gotta link to ya so I can get here easily. And so other people can dig your work.

Thanks for the support guys! I've got a list going of the words to use, so I'll do my best to keep new stuff up here.

Check back for another within a day or two. I'm hoping I can have a new one up by tomorrow, but we'll see.

My other art sites: